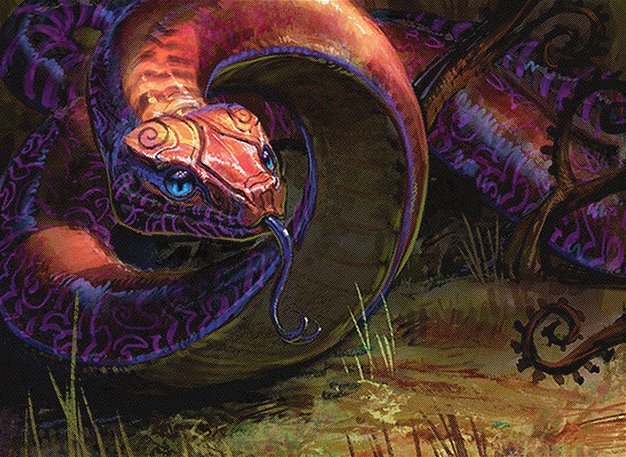 Do you like to go big and fast? This +1/+1 counters decks is exactly what you’re looking for.

Winding Constrictor, is the main asset of this deck. Doubling counters is fun, but you have to find ways to put them on in the first place. Let’s start with the counters engines: Scrounging Bandar has insane synergy with the snake, doubling every counter you move from him. Maulfist Revolutionary has a nice body and relevant abilities, and Ridgescale Tusker is the top of our curve, generally putting insane pressure when it comes on a sufficiently numbered board. The two rares of this decks are also really synergetic : Rishkar, Peema Renegade is both a pump spell and a mana ramper, and the infamous Walking Ballista is an absolute beast when it comes to destroying your opponent’s whole board or even life total. For non-creatures spells, we have a cheap removal spell : Prey Upon, another counter generator and a cantrip with Implement of Ferocity, and recursion with possible cantrip with Resourceful Return. Meanwhile, the Sideboard has various card that plays into the weaknesses of the decks : some CA engines and situational removals

Credits: find all the scientists papers from busterducks and others on our Discord server. Art by Izzy for Wizards of the Coast. Image from Scryfall.