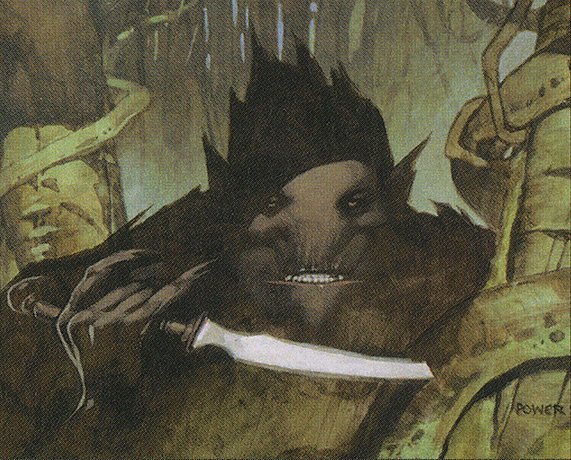 Hello! Today we try to build a quite unusual set, the old Tempest! I was quite surprised to see a common

Ancient Tomb in it. The set looked promising, but the creatures were quite boring. But I found a cool tribe in the set that can deal with this problem, I named the Dauthi!

The Dauthi are a bunch of friendly people who all share the same ability, shadow. That means they can’t be blocked, but they also can’t block! For example, you have

Dauthi Ghoul which will take profit of your Dauthi creature dying, and

Dauthi Mindripper, a 2/1 for three manas that can be sacrificed to disrupt your opponent hand.

But because Dauthi can’t block, you need answer to enemy creature. That’s why you got

Knight of Dusk, who can destroy any creature blocking it. I also equiped you with a playset of

“But all those spell cost mana to cast, and I’m gonna wait turns before I can play!” Yes! But that when Lotus Petal and Dark Ritual comes in! The two commons will help you accelerate your game plan, alongside with one copy of

And for rares, I kept for you only the best, the cherry topping the cake, I talk about

Commander Greven il-Vec, the biggest creature you can find! And I also gave you a funny way to get back in the game if you lose your board,

About the side, it is built for you to change your game plan for game two, going from an aggro shadow to a reanimator plan that aim to stay longer using the old combo with

Bottle Gnomes to tempo against any aggro deck after turn five. You got three copies of

Coercion, to remove problematic cards against control decks. And you can finish with

Reanimate to get back you best creature in exchange of some life points.

Tempest – B – Dauthi By soulsR

Credits: find all the scientists papers from soulsR and others on our Discord server. Art by Dermot Power for Wizards of the Coast. Image from Scryfall.