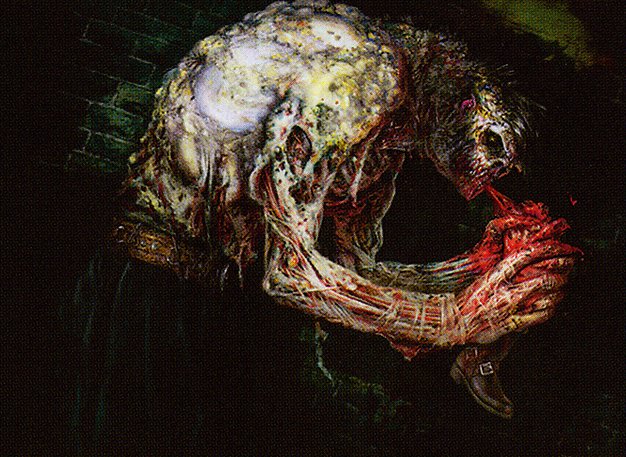 Well… That’s another BG deck for me, as you know I love those colors. But today, it’s a special deck! We’re trying to verify if Fanfan’s statement was true! In the Primordial Website, he stated: “In short, Primordial is a format where: […] –

Korozda Monitor is a serious option.“

So today, we’re taking our bags and planeswalking to the world of Ravnica, and try to build with this

The goal of the deck is to play small creature early in the game and then to grow them into more dangerous threats. For this, you got a playset of

Lotleth Troll, a trampling, self-protecting creature who can also grow himself while filling our graveyard with scavenging creatures. You can then use scavenge ability of many creature like the Monitor,

Sluiceway Scorpion to grow more your creatures. You can also use

Dreg Mangler to play a more aggressive way or scavenge on

Sewer Shambler if your opponent plays swamps. Your biggest creature in the deck is

Deadbridge Goliath, a vanilla 5/5 for four mana with scavenge, and it makes a big threat in every way.

You play only three instants, two

Ultimate Price to use as removal and a

Golgari Charm wich is a powerful, multi-fonction instant that can be used against aggro, or to save your board against a boardwipe.

About the side, you got a bunch of removal, like

Launch Party to fill your graveyard more and more. You also have two copies of

Cremate, to cancel graveyard shenanigans of your opponents.

Credits: find all the scientists papers from soulsR and others on our Discord server. Art by Vincent Proce for Wizards of the Coast. Image from Scryfall.