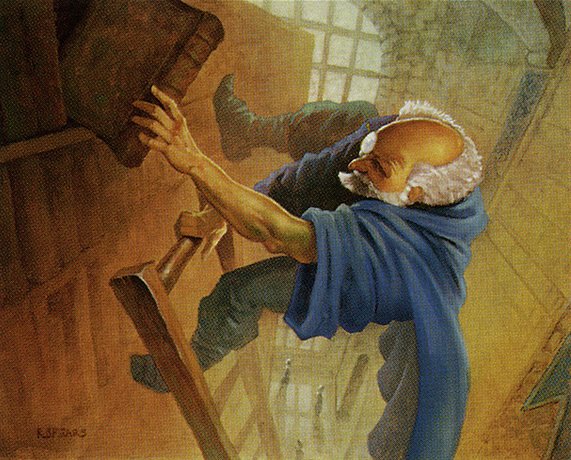 5 tips to create a Primordial deck by Aliquanto

Primordial being a singular format, creating a deck can raise some questions even for experienced players. To help us, Aliquanto (two times winner of the Primordial Discord Tournament) answers 5 questions about archetypes, mana base or the analysis of a set.

1/5 How do you proceed to analyze an edition and create a deck?

I usually use two tools for that: Scryfall and Deckstats. Scryfall is the main database for Magic, and offers several powerful sorting tools, whereas Deckstats provides ways to create categories within a deck and some statistical analysis tools. I assume you could use any website you like for your decklist, however I can’t get myself out of Scryfall anymore.

When you want to analyze a new set, I recommend to start with having a look at a Limited analysis of the archetypes in the set. They are likely to show you good ideas for your deck, and especially indicate which cards are key for those archetypes, especially at common, since they will compose most of your deck, and it won’t be functional if you don’t have enough good commons to fill it with. Ratings of the best cards of this set for limited can also indicate which cards were staples in this set’s limited formats. But remember that they might not work as well in the Primordial meta than in those limited format’s metas.

Going onto the actual analysis of the cards, start with the commons, since they are the core of your deck. Look at the list of commons in the set, sorted by color, and take notes of the best commons in each color: burn spells (

Blink of an Eye), permanent removals (

Cancel actually), mana fixing (dual lands such as the usual taplands, or eggs like

Chromatic Sphere, or ways to search your library for lands like

Traveler’s Amulet), efficient aggressive or defensive creatures… Anything that is a staple in usual constructed formats/very powerful in limited is likely to be key in Primordial, and can provide a good structure for your deck without needing much synergy to be good. If there is a theme in the set, such as tribal decks, try to look for good creatures in each tribe too, and take note of those somewhere.

Once it’s done, have a look at your notes, and try to check which colors has the most “good” commons, or the better diversity among answer, or the most synergistic cards (read: good cards of a same tribe), and eventually which 2-colors combination covers the most of those angles. Also, check how good the mana fixing is in this set. Eventually, you could consider playing 3 colors or even more as a splash if you have a very good mana fixing at common.
You should start having an idea of which archetype(s) you might want to play in this set there. If there are a lot of decent burn spells, you might consider going for a Burn deck (same idea for a mill deck). With a lot of ramp spells and good payoffs at common, a ramp deck is going to be an idea (but don’t worry if you don’t find enough payoffs at common for your ramp deck yet, maybe the uncommons and rares will provide you with enough of them). If you see cantrips, counterspells, removals, card advantage, lifegain… Keep in mind that a control shell is an option. If there are a lot of good cards of a same tribe in few colors (or more if this tribe comes with mana fixing), then you are going to be in the market for a tribal deck! Etc, etc… Also, don’t be afraid to write down situational cards, since those might be useful for your sideboard.

In my sideboard, I usually look for effects such as wraths/global -X/-X, additional cheap removals (or removals for big creatures if my maindeck has troubles to deal with them), lifegain,

Naturalize effects, ways to return cards from my graveyard to my library against mill decks… Discard or counterspells can also work as ways to attack control and combo decks.

Try to run the same analysis for uncommon cards, and, if you don’t see many good uncommons, have a particular look at the lands, since they might be a way to fill your deck with uncommons if needed (the same goes for rares). You can eventually look for some more “exotic” effects as the rarity goes up, that might take your opponent off guard, or higher value cards, but also for cards that might fit the strategy you start building, such as lords for tribal decks.

Finish with the rares/mythics. DO NOT focus your strategy on one of those, unless you have several ways to find it, but rather think about them as jokers that might turn the tempo of the game in your favor, such as a wrath or a Planeswalker.

Once you wrote down all the cards you are interested in for each color (combination), you should now be able to tell which archetype and color combination you want to play. From there, focus on those, and follow the building process of a Magic deck you are used to (creating your gameplan, working on the curve, tuning the manabase, choosing how many copies of each card you are going to play, creating a sideboard and sideboard plans, etc, etc…). Don’t be afraid to give another look at the set and especially the colors you want to use in case you miss something, and make some researches by keywords if you are looking for something specific (for instance “counter target spell, “discard”, “add mana”…).

2/5 What are the archetypes that it is possible to play in Primordial?

The possibilities are quite large: basically, all 4 macro archetypes of Magic are represented, even though combo is the least common in Primordial since very few sets actually have combos in them (for instance

Vesuvan Shapeshifter, but also self mill decks with a wincon such as

Jace, Wielder of Mysteries). And any color combination might work, even though it’s likely to depend more on the actual color combinations made to work in a set (as well as on the mana fixing). Note that one specific archetype works better in Primordial that anywhere else: Mill, since, obviously, is easier to mill 40-7 cards than 60-7 cards. Sometimes, you might even find some gems, such as a toolbox deck from 5th Dawn, that has quite an unusual gameplan of finding and looping

Engineered Explosives and other 1 mana artifacts.

3/5 What are your recommendations concerning the mana base?

Try your best and trust Frank Karsten: https://www.channelfireball.com/articles/how-many-colored-mana-sources-do-you-need-to-consistently-cast-your-spells-a-guilds-of-ravnica-update/
This is the bible for any player that wants to build a good manabase, even among pro players. And the data in it even considers 40-cards deck, so all you have to do is to check what are the colors constraints of your deck, and then use the table to check how many sources you need for that (eventually, for some specific mana costs, look further in the article to see whether it is covered). So, basically, you shouldn’t really expect to cast

Cryptic Command on turn 4 that often in your Lorwyn deck unless you have 14 blue sources in your deck, which means that you need almost only blue lands, so you won’t have much place for another color, unless you fit in several dual lands or other ways to fix your mana. Don’t be too greedy!
As for the total amount of lands, this question is covered in another article of the same author, that also has a table for 40-cards deck: https://www.channelfireball.com/articles/how-many-lands-do-you-need-to-consistently-hit-your-land-drops/
On average, you should go with 16 lands, and then see if you need more or less depending on how high is your curve, how important it is to hit your land drops, and how many other ways you have to find your lands or produce mana.

4/5 Is it necessary to play common in 4 copies each?

Do you always play 4 copies of your cards in other (non-singleton) constructed formats? Of course not! Neither will you in Primordial. Let’s stay with the same author: https://www.channelfireball.com/articles/how-many-copies-of-any-given-card-should-you-put-in-your-deck/
This article explains the reasoning behind the amount of each card you play in 60 cards deck (not 40 cards decks this time alas, since Constructed does not usually contain 40-cards formats). It still applies relatively well to Primordial, but remember that in a 40-cards deck you are going to see way more often a card than in a 60-card deck. For instance, if you have 4 copies of a card in a 60-card deck, you are going to have at least one copy in your opening hand about 40% of the time. However, in a 40-card deck format, you will have it about 55% of the time (without mulliganing). This article explains how to compute those probabilities: https://www.channelfireball.com/articles/an-introduction-to-the-hypergeometric-distribution-for-magic-players/
Note that it also applies to uncommons: you don’t have to play 2 copies of the same uncommon if you don’t want to ever risk to draw the 2nd copy.

5/5 For those who are less comfortable with deck building, which sets would you recommend?

Most likely the sets you know well, and/or have a sentimental bond to (for instance the first set you drafted). If you are still unsure, try to go with a Core Set. They usually contain a lot of staples, and not too many weird cards, so you should be able to just build a goodstuff take with ease in one of those sets. M12 can be a good place to start for instance, with staples at common such as

Credits: art by Ron Spears for Wizards of the Coast. Image from Scryfall.