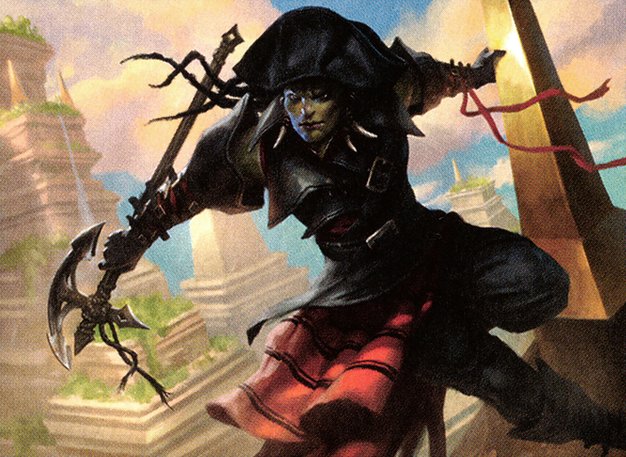 Aren’t you bored of Aliquanto’s papers? Don’t you want to crush some face and kick some ass? Blue decks make you fall asleep? Then I got THE deck for you.

From the far away world of Ixalan, pirates wait for their hour. Enable a quick assault on your enemy by using the most powerful 1-drop in the history of piracy:

Daring Buccaneer. This powerful vanilla 2/2 is made for smashing! Follow up by casting some

Grasping Scoundrel and swing for damage! Curve on second turn by playing the less impressive but still powerful

Goblin Trailblazer, a real menace for creatures-light decks. Need some draw? One of the best 2-drop in limited come in! Make place for the

Dusk Legion Zealot and find what you need at each draw! Need to remove a big blocker that bother your army?

And to close the game, I offer you this uncommon from Angrath planeswalker deck,

Dire Fleet Neckbreaker! The ideal card to break some defenses, by buffing our attacking pirates. And where is the fun playing an army of pirates without the greatest captain in history, I named

Angrath, the Flame-Chained! Use it as a finisher by shocking your opponent to death, or steal their biggest threat to smash hard! Works well against marit lage. And how to play an aggro deck without the card that terrorised Ixalan standard,

Rekindling Phoenix! Big flyer, biggest threat in your deck, can come back each turn, what do you want more?

About your sidebard, you have everything you need: Having problems against that creature-heavy deck ? Make a hole in it with

Dire Fleet Poisoner, and destroy his hope to win this game! Need a couple more pirates?

Forerunner of the Coalition got your back, giving you a free tutor and pinging your opponent to death!

Credits: find all the scientists papers from soulsR and others on our Discord server. Art by Daarken for Wizards of the Coast. Image from Scryfall.

Check the best decks of our original events: